The Honda Fireblade has a history shrouded in success and dates all the way back to 1992, the original blade was hugely popular, mainly due to its power advantages over its 750cc competitors along with a huge weight advantage over the heavy 1000cc bikes. Over the next 30 or so years Honda have continued to refine and update the Fireblade, reinforcing its reputation for high performance and reliability. In my opinion, the last couple of years havn’t been the best for the Fireblade. The likes of the new S1000RR, the new R1 and the V4’s from Aprilia and Ducati have taken the limelight and I feel that last generation Fireblade was left a little bit in the shadows. But, not any more! This all new version of the Fireblade has been completely redesigned from the ground up and its focus is firmly set on being competitive on the track. 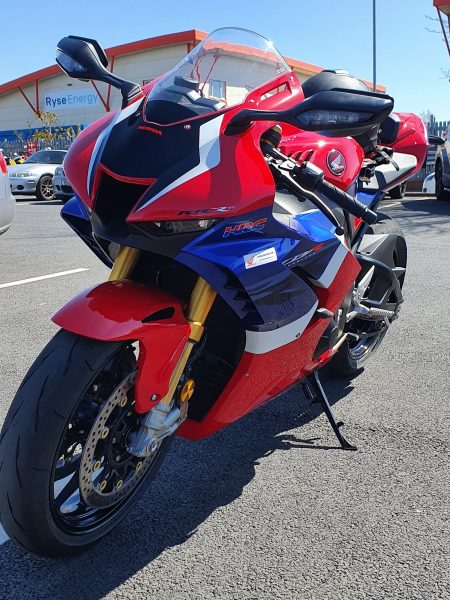 The headline figure for the bike is the horse power, this bike makes 214.5 brake horse at 14,500 rpm…which is just absolute madness from a road going motorcycle. Thats more power with a higher rpm than any other mainstream inline four currently on the market. The only production bike with a higher output that comes to mind is the Ducati V4R which puts out 217bhp, but obviously that bike is a homologation special and not mass produced like the blade.

This new bike is sporting various HRC logos, this isn’t something Honda will slap onto just on any bike. Only bikes with a significant input from the Honda Racing Company get to wear this prestigious badge. Infact, the project leader for this new blade also developed the 2002 and 2016 RCV road bikes. To help get the most from the engine, the new blade is packed with electronics. The bike is equipped with multiple modes for traction control and wheelie control as standard, multi mode ABS, electronic suspension, keyless ignition and the SP version like I rode for this review is equipped with an up and down quickshifter as standard.

The frame has been redesigned and the wheelbase is now longer, we’ve got full Showa suspension on the base model with the SP being treated to upgrades from Ohlins, all controlled electronically. A brand new swing arm, what’s particularly interesting is the rear shocks top mount is actually attached to the engine rather than part of the frame.

Honda have tackled the new winglet trend perfectly in my eyes, they look super sleek and less like a space ship…Honda claims these winglets give the bike as much downforce as their 2018 Moto GP bike.

The fairing and bodywork, according to Honda, gives aerodynamics that are best in it’s class. Every little detail has been carefully designed to direct the flow of air and water around the bike.

This bike has such a ridiculous amount of features I could write for days about it, but the most important thing is how it rides – I couldn’t wait to get going.

From the moment you get on the bike its clear this bike was born for the track, the pegs are high and the bars are forward and low, forcing you into a racing position. All you have to look at is the TFT screen, no clocks, dials or buttons. The starter button for the keyless ignition is hidden away to the side of the screen so it gives a really clean look, it feels much more like your sat on a proper race bike rather than a road machine.

I was really impressed with how the bike manages in built up areas, considering the mind boggling power the bike produces it feels very lazy and docile when lower in the rev range. Leaving the North West Honda Super Centre (who kindly loaned me the bike) I jumped straight onto the M55 motorway to get to grips with how it accelerates…and boy does it accelerate! Once you get to around 4,500 RPM the bike opens a valve in the exhaust and the thing just takes off, in all honesty it took my breath away especially after it being so easy and gentle in the town just moments earlier. Any gear, any RPM, open the throttle and your thrown into a world of torque. Once the 12 year old boy in me had settled down I opted to pull off the motorway to see how the bike handles the great British A roads.

Long sweeping bends and fast, shorter corners are both an absolute pleasure on the RR-R. The bike feels like it’s on rails and just sticks to the road beautifully. It did feel a little bit hard on some of the bumpier roads, but I’m sure you could tweak this with the electronically controlled Öhlins. I didn’t really play around with them much on the test ride, but if the bike was my own I would 100% be exploring the options to find what works best for me. 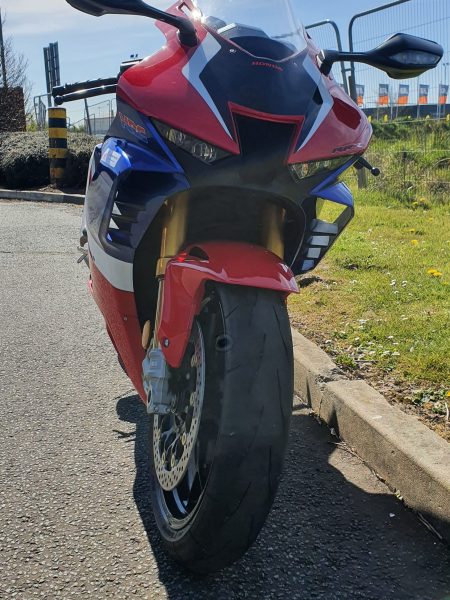 Giving this bike back to the dealership was a really hard thing to do, what an incredible machine! It honestly feels like they’ve simply bolted some lights and indicators onto a fully fledged race bike. It’s such a crying shame that your so limited to what you can do on the road when the bike has so much to give. I would love the opportunity to ride it on the track. With a set of slick tyres, I struggle to see what you could go faster on in terms of a stock bike.

The slightly longer wheelbase really makes a difference, the bike just glides effortlessly through corners. The flatter power at low RPM really makes the bike easy to ride on the road, the only down side to that is the bike makes so much power and revs so high, it’s unlikely you’ll get the opportunity to really open it up on the road. By the time you get to the high red line you’ll already be carrying a ridiculous amount of speed as all of that power is crammed into the higher rpm…I remember reading an article from MCN last year where they managed to hit 144mph in second gear… it really is just stupid fast.

No real complaints that I can think of, if I had to nitpick- the indicator controls just feel a bit naff…it’s hard to tell if pressing the buttons has worked without looking down at the dash for confirmation. Also it’s quite cramped, the bars are low and the foot pegs high. It didn’t really bother me on the test ride (and I had the bike all day) but if your a taller rider and looking at maybe doing some long distance riding it’s definitely something you should consider.

The best part of all of this? This bike is a Honda, you know its going to be reliable with amazing build quality. Everything on the bike is beautifully finished, many times throughout the day I found myself just admiring it, it really needs to be seen in the flesh to be fully appreciated. With prices starting just under £20,000 and increasing with the SP variant, it will unfortunately be out of reach for most. With that being said, when you consider the development that has gone into the bike and the performance that it gives you…I’m not sure you could go faster on or in anything for less money.

The engine in this bike is really what makes it, to produce such an aggressive, face melting amount of power yet still make the bike so easy to ride on the road is commendable. Lots of exotic metals and technologies derived straight from Moto GP…its an absolute marvel of engineering. With all the power being high in the rev range, it could take some getting used to if you wanting to be competitive on the track, but for riding on the road I was beyond impressed with the engine.

Now the SP variant I rode had fully electronic Ohlins, the base model comes with a Showa set up. Both offer a plethora of options and are more than capable for the road or track. Perhaps if your a Marc Marquez there’s some room for improvement, but for us mere mortals this bike will offer more than we could ever use.

With its new Brembo Stylema four-piston radial mount brake calipers, a Brembo master cylinder, adjustable ABS and rear lift control, the RR-R has plenty of stopping power. Again, on the track perhaps there’s some room for improvement but on the road? I’m not sure you will ever need more than what the bike has as standard.

Great build quality and attention to detail throughout. Everything is built to last, as we have come to expect with Honda’s.

This new 1000 RR-R really is the fully package. Eye watering performance, beauty and reliability. The only real downside is the cost of the bike over its competitors.