The Fireblade has long been the benchmark of superbike performance and dates all the way back to 1992, the original blade was hugely popular, mainly due to its power advantages over its 750cc competitors along with a huge weight advantage over the heavier 1000cc bikes of the time. We did feature a custom version of second generation blade  last year over on the YouTube channel. Over the next 30 or so years Honda has continued to refine and update the Fireblade into its latest rendition, the RRR…again, there is a review for that bike on the channel as well.

2004 saw the big shift in focus for the Blade, with the bike moving from a 900cc engine to a 1000cc, that 2004 bike was tweaked slightly in 2005 before eventually making way to this version of the blade in 2006, so that makes this the eighth generation Fireblade.

Aside from the iconic Repsol colour scheme, from a distance, this bike looks very similar to the model it replaced. It’s only when you get a little closer you will notice the bike is slimmer with more aggressive angles, especially towards the front with the stock rear exhaust being treat to a cosmetic upgrade, though this bike is sporting a Yoshimura slip on. Other than that, the basic structure remains the same as the previous generation bike…even the clocks and dials are the same. So what’s actually different? 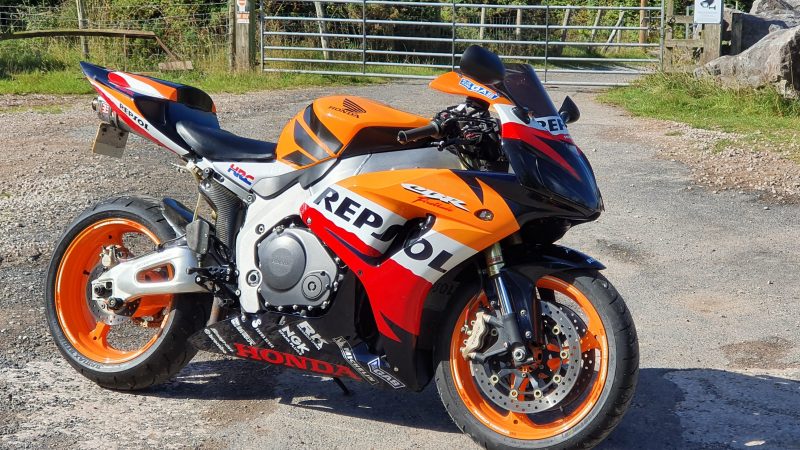 Lots of subtle changes were made to the internals of the engine, such as larger intake and exhaust ports, reshaped valves,a remapped ECU, and an increase of 550 rpm to the rev limiter. Despite this, the baseline figure of around 170bhp remains the same as the previous generation.

For brakes we have 4 piston calipers sat on 320mm discs, these discs are 10mm bigger than the previous bike.

We have the usual fully adjustable suspension that we have come to expect on sports bikes, this is paired with Honda’s fantastic electronic steering damper, or HESD. But really, the three changes that made the biggest impact on this bike were the change in gearing, the new shorter wheelbase and the extensive list of tiny tweaks to save weight…even the smallest of changes, such as the brake disc thickness being shaved of 0.5mm and replacing aluminum with magnesium collectively add up to a noticeable difference.

In 2007 the now famous Repsol edition was added to the line up. Any Fireblade connoisseur will always enquire as to whether its a true genuine Repsol edition bike. This can be confirmed by checking the VIN of the bike. Repsolforum.com is a great resource for confirming a bikes authenticity. This  is  something to be aware of if you’re looking at getting a Repsol Blade as they are a very easy bike to replicate. Unlike most bikes where the tank is painted, the Blade’s tank is actually covered by a plastic fairing…as it’s so easy to swap you will find lots of Blades and 600RR’s with aftermarket fairings.

When first throwing a leg over the Fireblade the first thing that I noticed is how friendly the bike feels, the seating position is nowhere near as aggressive as some of the other sports bikes I’ve ridden recently. Maneuvering around town while on the hunt for some faster roads was an absolute breeze, the bike feels really docile at lower speeds, the clutch is light and the pressure is off your wrists.

Once out on the A roads is when things get really interesting, one you pass the initial few thousand rpm your met with explosive power that pulls hard all the way to the red line. There is bags of midrange power, which is something the previous generation Blade struggled with.

The handling is sublime, the steering is ultra precise and the bike holds its position on the road beautifully. The slightly more upright seating position I mentioned earlier was still working wonders. Even though you seem more upright you are still exactly where you need to be if you want to get your head in the bubble or shift your weight around the bike. The perfect balance, which is a good summary of this bike as a whole.

The only criticism I had with the bike was the aftermarket rear sets, which are no fault of the bike itself.

The big Blade was an absolute pleasure to spend the day with, it reminds me so much of both the 600RR and the 2020 Fireblade I’ve reviewed previously. Honda have a real nack of making a bike that can do everything perfectly. At no point today did the bike do anything but what I wanted to.

For a superbike, it’s surprisingly comfortable. Even though you are in a racing position it doesn’t feel as extreme as some bikes but somehow you’re still exactly where you want to be if you want to lean off the bike or get your head down behind the screen 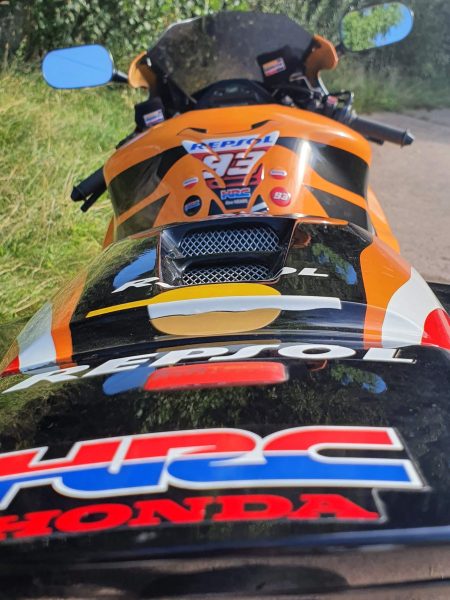 In all honesty, there wasn’t anything I disliked about the bike on my test ride and you will struggle to find an 06-07 blade owner with anything negative to say. Perhaps if you were on the track there might be places where you would want more, but on the road it offers far, far more than you will ever need.

And the best part of all this is? It’s a Honda, so you know it’s going to be well built and reliable.

As I touched on earlier, the only thing really to be cautious of if you’re considering buying a Repsol blade is to make sure the bike is authentic. If it has aftermarket fairings, while it could be innocent enough it could be hiding accident damage.

The 998cc inline four offers everything to everyone, super easy to manage at lower speeds and explosively aggressive power (that’s useable) when you want it.

Fully adjustable forks, rear shock and steering damper. Perhaps on the track you might want more but on the road it is more than up to the job of keeping you composed as you throw the bike around.

The rear does feel slightly underpowered…which is a minor criticism. The stopping power is strong and progressive.

Great build quality throughout, if Honda know anything its how to build something that will last. No complaints from me in this department.

Power, performance and as dependable as anything else you can buy today. The Fireblade really does offer the full package and is an ideal superbike for the road or on the track.

Many thanks to our good friends over at JD Comps for loaning us the bike.