The R1 is Yamaha’s long running flagship bike and has been with us now for “almost” 25 years.

The first iteration of the R1 broke cover in 1998 and made some big waves on the superbike scene. It brought with it several unique features, such as the revolutionary stacked gearbox design which allowed the inline four engine to be more compact than ever before. Making a claimed 150 BHP and managing a top speed of 170mph, the original R1 made no bones about making a stamp of authority both on the track and on the road.

In 2000, a tweaked and improved version of the bike was released. Although the bike shared lots of similarities to the previous version, Yamaha had identified some key areas for improvement. The biggest changes came to the internals of the engine which now housed lighter cams, improvements to the transmission, rejetted carbs and an upgraded ECU. 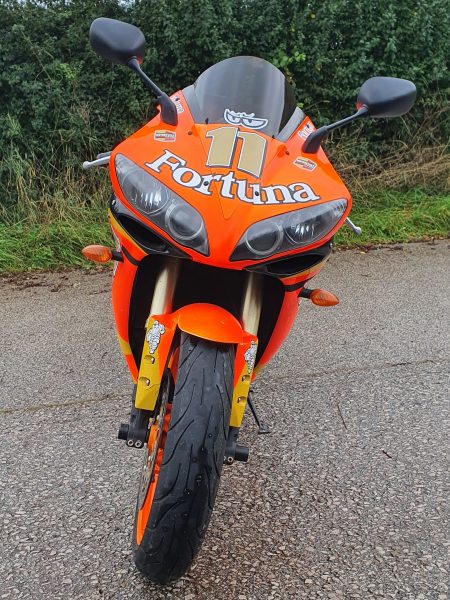 In 2002 the third revision of that original R1 was released and saw yet more improvements. Two of the biggest changes came in the form of a clever CV carb slide which was controlled by the vacuum created by the engine and the revised Deltabox 3 frame which had fewer welds than the previous bikes frame and offered 30% more rigidity. We did  review for the 2002 R1 last year.

Then, in 2004, Yamaha brought us this completely redesigned R1 and was the first bike ever to achieve a 1:1 power to weight ratio. This version of the bike featured a brand new Delta Box 5 frame which offers a 200% increase in rigidity over the previous model. This was achieved by tilting the cylinders forward 40 degrees which allowed the top of the frame to run in a straight line from the headstock straight down to the swing arm pivot. Yamaha also changed up the appearance of the R1 with sharper, more aggressive bodywork and the iconic twin underseat exhausts. The engine itself was redesigned and featured sleeveless cylinder blocks and new crank cases, making a claimed 171 bhp, it was the most powerful R1 of the time and is still a very respectable figure by today’s standards.

Other improvements made include the addition of a factory fitted steering damper, the brakes were upgraded to radial mounted calipers sat on 320mm discs  along with a radial mounted master cylinder and the clutch basket was modified to reduce its weight by 5% and made use of coil springs rather than the old fashioned diaphragm springs

The first thing that I really noticed when sitting on this shape of R1 is how aggressive it feels compared to other sports bikes of the time. I reviewed the 2007 Honda Fireblade only a week or two before riding this R1, as it’s from the same era I found myself drawing lots of comparisons to that bike.  The bars feel much further forward on the R1 and the pegs higher.

The acceleration is really aggressive once you pass around 4500 RPM, being that the bike produces around 170 bhp and has a dry weight of around 170 kg, its still a seriously capable bike even by todays standards. Once you get into that peak power area the R1 attempts to pull your arms out of their sockets right the way to the red line.

The bike feels quite docile at lower speeds which is fairly typical of this engine configuration…if anything that’s a blessing really, having that power available in the low RPM’s would make the bike a nightmare to ride.

The bike handles beautifully and tackles long sweeping roads and tighter, more technical corners with ease. It stays well planted and the road and doesn’t do anything unexpected. I did find it quite heavy to tip in at times, but it’s not a difficult bike to ride by any means and it fills you with confidence to push as hard as you want to.

The point I found myself coming back to several times is how hard it is to comprehend that this bike is knocking on the door of 20 years old, it doesn’t feel it, look it or act like it.

I found riding this bike today really interesting, being that the last bike I reviewed a few weeks back was the 07 Fireblade…granted a couple of years newer than this but they are from the same era. I expected them to be very similar, and in some ways they way, but the R1 is a totally different beast to the Fireblade. While still being a fairly easy to ride, this bike feels much more focused on just being fast where as the Fireblade really felt like a jack of all trades.As is typical with inline fours the low end power is very flat, which really works to your favour in town or in heavy traffic. But, once you pass around 4500 RPM the bike explodes with power and pulls hard all the way to the red line, the engine and gearbox are both silky smooth and the throttle response is perfect, especially when your higher up in the rev range.

The bike handles beautifully and holds is position well on the road, though you do need to man handle it a little bit.

Given the absolute bargain price you can pick up bikes from this era now I can honestly see no reason not to recommend one, there wasn’t really any major issues with this model R1 infact its often been praised for its build quality and reliability. A gentleman by the name of Nick Sanders quite famously rode around the world in just under 20 days on this exact version of the R1, it tackled everything he threw at it and more…that same year John McGuinness won both the Superbike and the Senior Isle of Man TT , again, on this version of the R1. If those aren’t  two testimonies to a great bike then I don’t know what is.

Excellent power delivery that’s fairly evenly spread all the way to the red line. This R1 has bags of power and is paired with a fantastic gearbox.

Fully adjustable forks, rear shock and a factory fitted steering damper. The R1 tackles everything you can throw at it effortlessly. The bike does feel a little heavier to tip in and out of corners than other bikes in its class.

320mm discs with radial mounted calipers and master cylinder for the first time on an R1. The brakes are progressive and plentiful, more than you’ll ever need on the road or for the odd track day.

Great build quality and attention to detail throughout. The R1 was renowned for its reliability. Everything is well finished and built to last.

Bags of performance, killer looks and super reliable…sure it’s almost 20 years old now, but who cares? On a twisty A road or on a track day this old girl will give many modern superbikes a run for their money.

As always, a huge thank you to our good friends at JD Comps who loaned us this bike for review. Do take a look at their website, they give away awesome prizes every week including all of the bikes that we get for review.