It’s always a pleasure to spend the day with a Fireblade, without even riding it you already know it’s going to be a quality bike. Ever since the original 1992 Fireblade, year after year Honda have continued to be at the forefront of superbikes sales… and that’s for good reason. I can personally vouch for the continued theme of performance and build quality the model has carried through its 30 year old history as I’ve been lucky enough to review a few different generations of Fireblade for this channel.


2004 saw a big change for the model, moving to a 1000cc variant for the first time. This was later refined for the 2006-2007 model. This particular model is one I have always fancied having a proper look at. The new, revised shape blade was a bit marmite when it was first released and not everyone was onboard with its new look. Personally, I thought its new RCV styled look was fantastic, and it’s only got better with age. This bike is almost 15 years old now and it still looks fantastic. 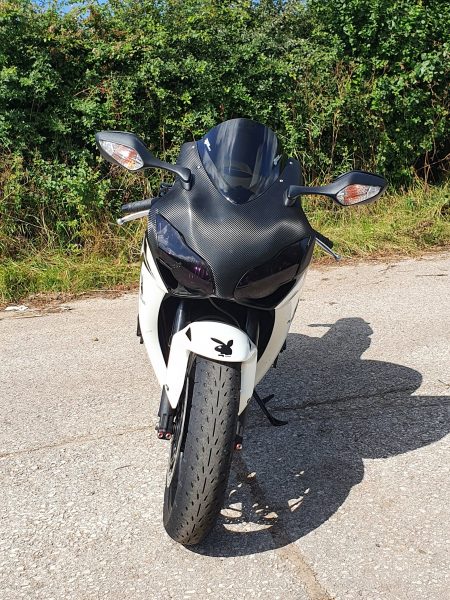 The 2006-2007 version of the Fireblade was arguably the best road going superbike of its time. So, what’s different on this bike over the version it replaced?

The most visible change, as we’ve already touched on, is the cosmetics. The whole bike was redesigned with design elements from its RCV big brother from 2008 and it carried this shape all the way until 2016. The next visual difference is the change in exhaust placement, previous 1000cc blades all had their exhausts mounted under the rear seat, but on the 2008 version they moved it down under the rear footpegs. The goal here was mass centralisation, which in basic terms is moving the bulk of the weight towards the center of the bike. The new 4 into 1 pipe hides a pressure actuated valve that routes the air around different chambers inside the exhaust. This helps to maximize the bikes performance while ensuring it meets noise and emission regulations.

The engine is more compact, lighter and produces a little more power than the 2007 version. The frame is also lighter and more rigid than the previous model. Interestingly, the wheelbase is exactly the same as the previous bike, but the new compact engine allows for this bike to actually have a longer wheelbase than the 07 bike.

Continuing with the theme of being lighter and more compact, we have a revised version of Honda’s Electronic Steering Damper hiding up here underneath the tank.

Two other key features , the first is the introduction of a slipper clutch, which on this bike is quite clever. It allows the clutch plates to slip on aggressive downshifts, which is what a slipper clutch is designed to do, but this one also has a ramp mechanism which actually applies clutch pressure under heavy acceleration. The second is the ignition interruption control, or IIC, that was introduced on this bike. This isn’t traction control, but it works in a similar way and was designed to minimize drivetrain lash under harsh acceleration.

So I’ve enjoyed spending the day with this bike just as much as I knew I would. The Fireblade has always has always been known for being a very easy bike to live, while at the same time being massively capable.

I think the first thing we need to talk about is how the bike handles, it is phenomenal. The bike feels so light and nimble it honestly feels more like riding a 600cc supersports bike. In stock form the blades suspension is set up to be on the soft side, but even so the bike is so stable and confidence inspiring. This only proves what a fantastic job they did with the bikes chasis and the work the electronic steering damper is doing behind the scenes. Of course the soft stock suspension settings was an intentional move from Honda to keep the bike comfortable and usable on the road, getting the bike to a track with track specific settings would only further improve what is already really good.

Power is the next thing to talk about. As is typical with an inline four engine, the low RPM is quite flat which actually works to your advantage when riding in traffic or through towns. From around 4,000rpm you’ll be treated to some strong mid range torque that pulls hard all the way till around 7 or 8,000 rpm where you’ll be treated to what feels like another big surge in power that will carry you all the way to the redline.

As you would expect with a Honda of this caliber, everything is well engineered and built to last. Honda have always been known to build reliable products and the Fireblade is no exception to that. There isn’t really much in the way of equipment or rider aids, other than the IIC and slipper clutch mentioned before. In a way, this bike is the swan song of analogue superbikes,the last of its type before everything came equipped with the electronically controlled assists that we see on the majority of today’s bikes.

What don’t I like? These stickers. In defence of whoever put them on they are clearly a nod to the French racer Randy De Puniet and his LCR Playboy Honda, but they don’t do it for me if I’m honest. I have heard reports that this generation of Fireblade do have a tendency to eat oil, fortunately that’s super easy to keep an eye on with the sight glass on the side of the fairing. Not really a problem, more something to be aware of. The later versions of this bike, so from around 2011 onwards did fall behind a little in terms of performance as bikes like that BMW S1000R came on the scene, but even so it still was, and always will be an incredibly capable bike. If you’re in the market for something fast, something reliable, something easy to live with and most importantly something that’s just as much fun on the road as it would be on the track, I would strongly suggest you consider looking at this generation of Fireblade